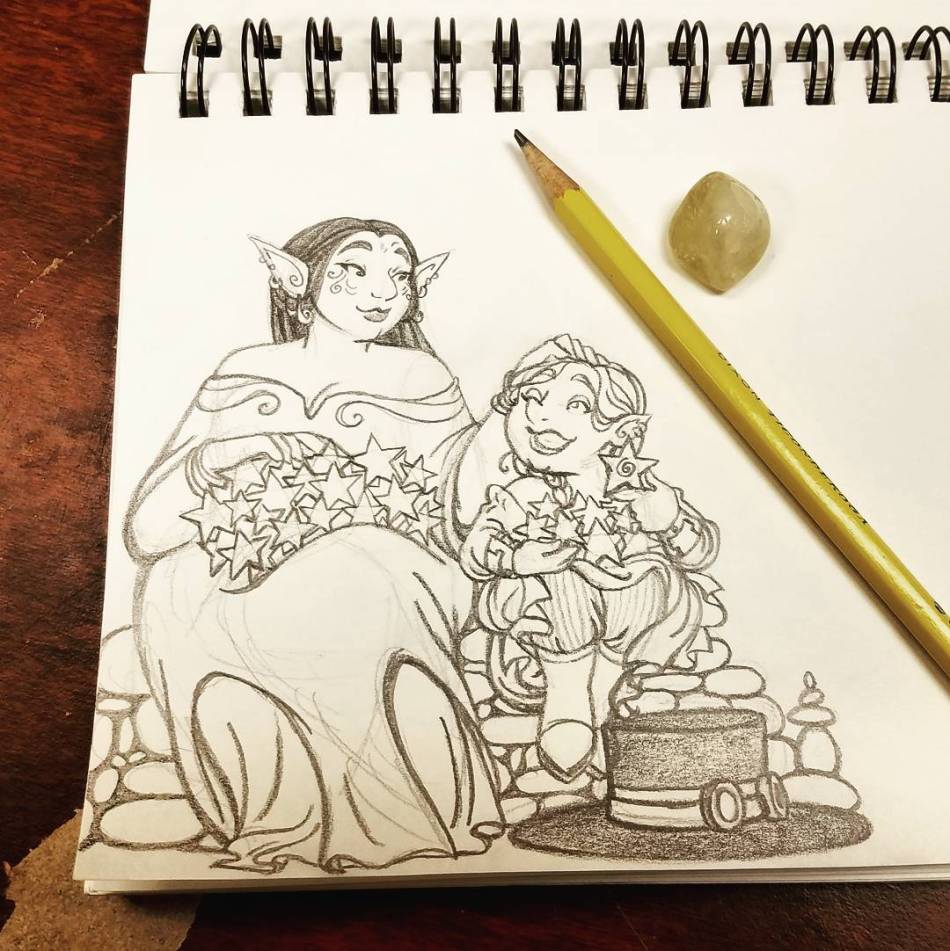 Happy Saturday dear readers 🌟
I‘ve been having trouble getting drawing this week, so here’s some sweetness in the meantime – with a certain Elf, and a certain Gnome.
(…..Mariatu and Tock, that is. You know that by now. I’m being silly.)
As for other progress – the pencil work for page 82 is about halfway done, yay! And I do plan to have the “Meanwhile…” Yurt scene up for Patrons only soon, with a bonus sketch of a certain Chieftain.
I hope 2018 has been treating you all well so far, and that you’re all staying as warm as possible!
~
All content © Rachel Terwilliger, 2010-2018.

(I believe I promised a story about how this all started, as part of Seven Years of Tock, so here we go!)

Once upon a time, a young aimless illustrator submitted various drawings to an indie magazine called “Crossed Genres.” They had an open-submission policy that paid artists when their submissions were for publication, so it seemed like a good deal.

Unfortunately this was many years ago, so a certain….. skill level was lacking, and the illustrator did not get accepted. Still, she tried, and the people who ran the magazine were very nice and encouraging to her.

A while later, this magazine saw fit to hold a competition – seeking webcomics! If accepted, the chosen comics would be published online for their members, one page a week for 52 weeks, and then published in print in one big compendium. Even though I hadn’t gotten any of my illustrations accepted, one particular member of their team reached out to me (whoops, dropping the vagueness) and encouraged me to submit a comic.

I honestly don’t remember WHY I chose to submit – I was actually at a rough patch in my life, so perhaps I thought that creating a comic would fill a certain hole in my spirit. But that’s a different story.

Anyway, I did choose to give it a shot, but then the question was – about what?

My wife is very good at asking questions to get at the root of what I want to express with character and story, so when I came home that afternoon with that decision – the questions began, and Tock was born.

I decided I wanted to tell a story about a Gnome (surprise) who fell in love with an Orc (surprise) while going on an semi-inversion of the Prince Quest – off to rescue fair maiden in a tower, and all. Setting: steampunk, because yay ❤ So that meant airship, and thus a crew, including a pilot friend of her’s and a magic user of some kind, since the Orc would fill the warrior ‘slot.’

I came up with the vague description of the plot, with a couple of character designs and example images as instructed for submission. 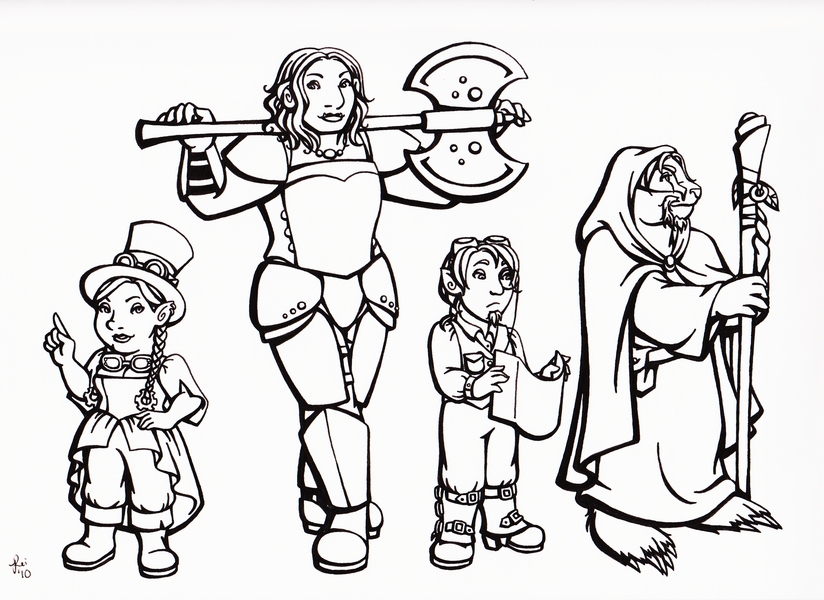 However, without realizing it, I had censored myself – as you can see, Tock and Onna look a bit different from how they truly are. Due to my own worries about how the characters would be perceived (by the people in charge of picking the winning submissions, particularly), I thinned Tock out – so much for my size-positive mission. And in my excitement I didn’t think about why a “warrior class” person and a “mage class” person would look the way they do – so Onna’s fantasy armor looks very generic, and I didn’t have much of a reason for why Eunan wears robes like that.

I did not get chosen

Retrospectively, I can see why – not only did I hold myself back in character design, but the kind folks who were interested in me enough to encourage me could see that AND that I didn’t push the story as far as I could have. Again, they were super nice about it though, even so far as to say that to me so I could learn from it.

That rejection did hurt, but you know what happened? I did it anyway. 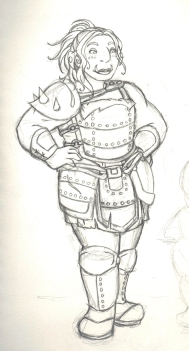 Tock got redesigned – slight tweaks, but still noticeably more well-rounded (both metaphorically AND physically, as you can see!). Onna got the biggest overhaul of all – I actually went and thought about what kind of armor she would have, as an Orc in her kind of culture (nomadic, almost scavengery at that point. The Viking details came later). Bumble didn’t change at all, and Eunan’s robes slowly evolved into a more Celtic design – so still very magey, but with a reason.

The story itself also got expanded. Certain details – like an early idea of Onna getting magically shrunk down to Tock’s size to better accommodate their romance (I know, yikes, right?), and a secondary plot about the current Gnomish princess, eventually got scrapped – I looked farther out than the scope of Tock’s quest to see what else is really going on with the world, and why her quest might have importance BEYOND her own, selfish motivations. The plot of the quest itself was adjusted to incorporate a greater vision – new characters were added, certain old characters of mine were pulled in to give the world history, and voila! A much more solid story slowly began to take shape.

I created this website in March, 2010 to announce the project, with a plan to launch the comic on August 30th that year – which I did, and though progress has always been pretty slow – here we are still ❤

Page by page and bonus content by bonus content, things have still been evolving and growing. The importance of some side characters increased, and another new crew member was added to address the treatment of a certain beleaguered best friend, rounding it out from 4 to 5 (which flows better, in my opinion. I always felt like something was missing at 4. And also thanks to my lovely wife, who is very much inspiring Actia’s creation and actions).

More and more the cultures of the world have been developed, the perfect match of Vikings and Orcs eventually smacked me upside the head, Gnome culture and religion grew to encompass a fuller pre-quest life for Tock and Bumble  – and also to point out problems with how the Gnomes view life, in addition to the wars and conflict that have already been mentioned world-wide.

(Psssst, there’s trouble with how ALL the races are acting, but any more details would be spoilers!) 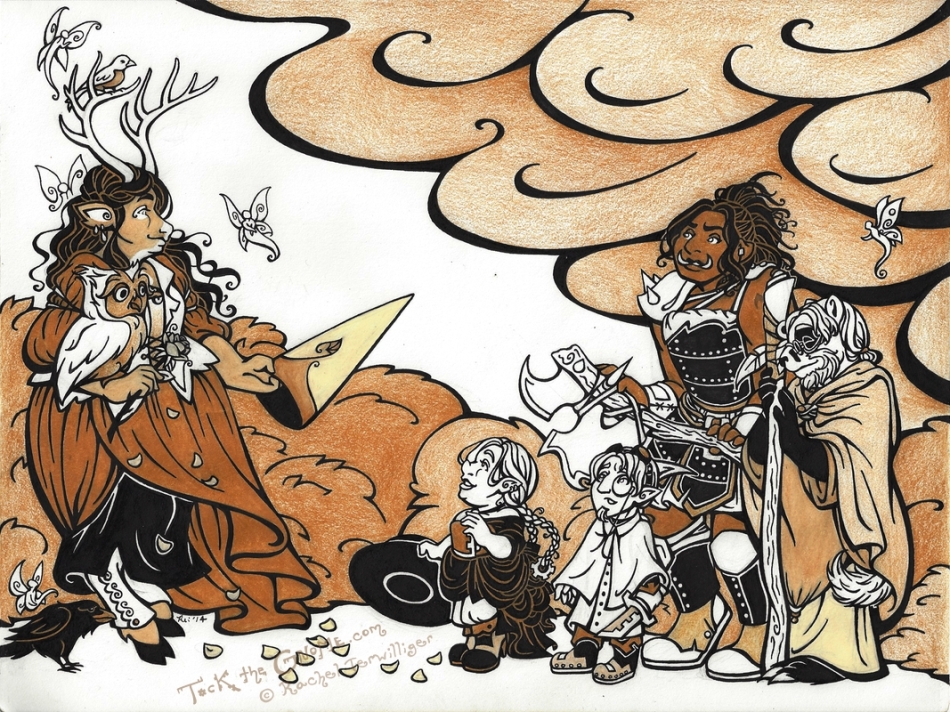 My own spirituality has been informing the comic more and more, too, so how very Faerie the world is has drastically shifted – I didn’t plan on actually addressing how  faerie-natured all the creatures of Tock’s world are, originally, but now that has become a huge part of the story and an informing factor of any of the foreshadowing we’ve seen so far.

I guess all I can say in closing is that I’m very grateful for how far the story has come, that I didn’t just give up on it – and even more importantly, that you all have stuck with it for so long!

Thank you so much for continuing to read the new pages as they come, and for your comments and likes and feedback on the bonus content I post. And especially to those of you who support it on Patreon – every cent gets us closer to more frequent updates! (And for those of you unfamiliar, there’s even more bonus work and world-building info up there, so please consider taking a look!) 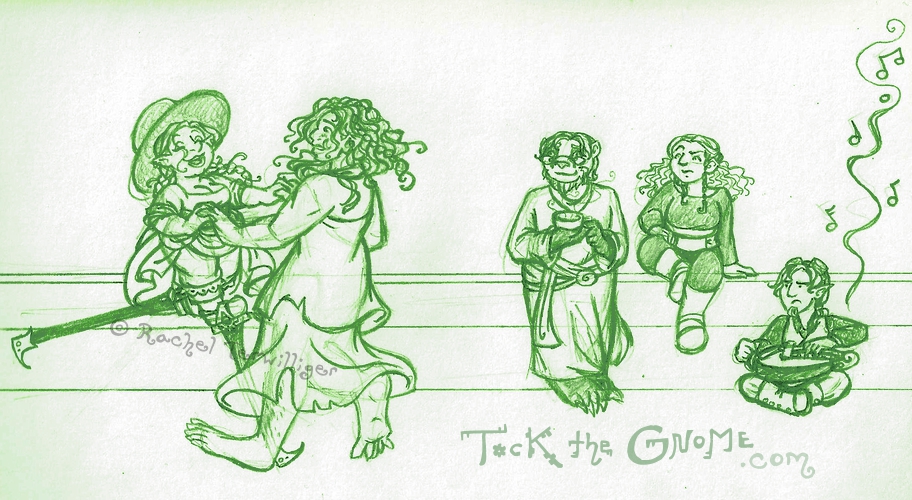 Gratitude from the bottom of my heart once again, dear readers! And happy Seven Years of Tock! 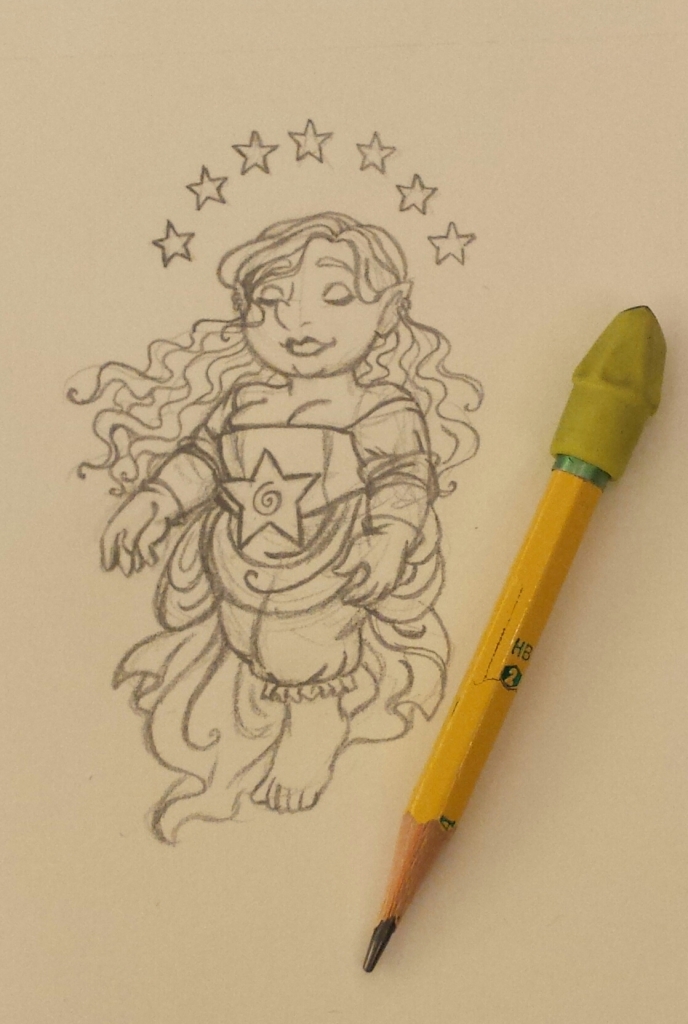 Welcome to 2017, Tock fans!
I had planned on having page 72 done for New Year’s, but a head/chest cold had other plans for me. So instead, here’s some extra Tock joy.
Thank you so much for your continued support and enjoyment of the comic. It means so much to me that I get to share this Faerie vision with you, and hope that Tock’s story continues to bring laughter, light and love into the coming year.

And remember, bonus material (including extra art and story sneak peeks!) is available at Patreon!

All content © Rachel Terwilliger. Do not copy or redistribute without permission.

From yesterday.
Prompt – Quest. So Tock and Bumble again 😀

Dedicated to anyone newly visiting from “Gnome and Fairy Fest” this weekend! Thanks for your support, and I hope you enjoy Tock and her story!

Small progress on a test piece for night scenes 🙂

I’ve been doing a very slow read/study of Brian Froud’s books over the last few years, and recently finished his famous work with Alan Lee,, “Faeries.” I enjoyed it very much, of course, but the quote above comes from a page near the back of the book – and it, of course, struck me hard. The information preceding it seems to imply that they’re talking about archeological finds in which tiny humanoid skeletons were discovered, but they identifed them as Gnomes and decided that for the purposes of their book, they do not exist.

So here is Tock, in defiance. I still adore and respect both Misters Froud and Lee, but strongly disagree with them. Tock, and other Gnomes, will ever be important in my Faerie work. And from and even more personal standpoint, I feel that Gnomes are True

Tock the Gnome
Create a free website or blog at WordPress.com.