So, for those of you who like behind-the-scenes sort of things, here’s how I plan out the pages before I begin drawing them.

First, I do rough thumbnails of groups of pages at a time. The image above shows the plans for pages 33 to 36. I sketch out the panels and the layout of the people and places in each one, making notes about what’s happening and about the dialogue as I go (the sections that I blurred out contained spoilers, sorry guys).

Once I’m satisfied with those thumbnails, I measure out each page on a new piece of paper, leaving room on the side to draw the thumbnail for that page again.

I actually do all of this out of my sketchbook, which may not seem as official as some would like, but I appreciate the ease of working with something I can travel with and work anywhere. Each page is 8 by 8 inches, while the thumbnails are probably about 2 by 2. I draw the new thumbnail space closer to the top of the page to leave room for notes again. Once everything is measured out, I then sketch the layout in the thumbnail and write out the dialogue below it.

Above example is from page 37.

After this step I move on to measuring out the panels themselves and actually drawing the page, but I’ll likely do a post on that some other time.

Gnomish religion is polytheistic, with a pantheon of many minor and major deities. Here are six of the major ones: 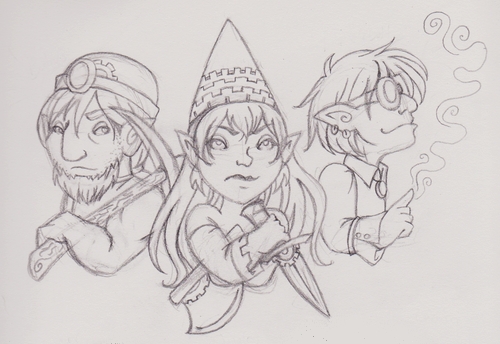 Butrus, god of stone, watches over the mining of precious gems and minerals.

Anosmia, goddess of protection and destruction, is often called upon for defense.

Fizzlebott, god of winds, looks over airships and other technologies.

Kimmer, goddess of soil, governs both plant-farming and wilder nature.

Carwen, goddess of love and creation, rules the arts and romance.

(Even though there are visual representations of the gods in temples and the like, individual Gnomes are free to envision them and worship as they personally see fit.)

The Gnomes of Tock’s world have been around for ages, though their recorded history only goes back as far as the very first airship, and the start of their steam technology. Before this, they mostly kept to themselves – living isolated on their mountain plateau kingdom. 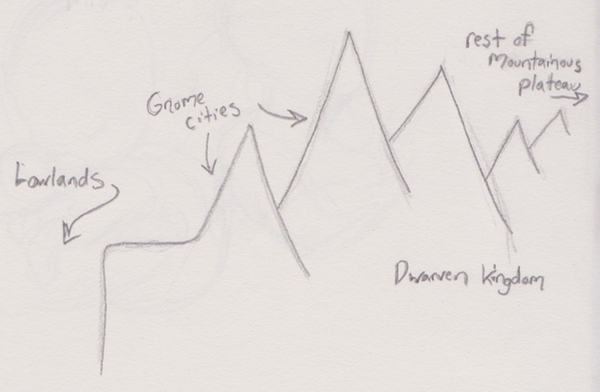 (The Dwarves and Gnomes do have a history, spanning several generations.)

When those Gnomes set forth in that first airship to see the rest of their continent, they did not like what they saw – the other races of the surface world seemed odd and brutal. It was decided that it was best to stick to their own kingdom – except for trade purposes.

This also led to the aspects of their culture that we would call “Victorian” – all that brutality inspired the Gnomish royal family to appear more restrained, to discourage contact with those peoples, and it caught on with the public.

Gnomes are therefore very mysterious to the other races, since they only travel for trade.

Their society is also class-based. The upper class consists of the royal family, the nobles, and their families. Below that is the working class, which makes up most of the Gnomish population. A small percentage of the population lives in poverty, often taking to traveling the mountains in caravans, searching for work or a place to settle.

Regardless of the class division, all Gnomes are quite imaginative and love figuring out how things work – whether its tinkering, mining, making jewelry, or just the basic goings on of life.

Due to the many,  many distractions/obligations of the holidays, “Tock” will be updating a little differently for the next week or so. On Monday the 27th, instead of the next page release, I’ll begin posting bonus material about the Gnomes of Tock’s world. Several posts are planned, including sketches as well. Regular updates will resume January 10th, 2011, at the latest.